Tech industry's protest of Executive Order 13780 is a political show

As President Trump fulfilled his campaign promise to make America safe again through the issuance of Executive Order 13780 (EO13780) banning immigrants from specific countries in the Middle East which are known incubators of Islamic terrorists, American companies in the technology industry have renewed their protest against EO 13780.

Each of these countries is a state sponsor of terrorism, has been significantly compromised by terrorist organizations, or contains active conflict zones.

Recent history shows that some of those who have entered the United States through our immigration system have proved to be threats to our national security.  Since 2001, hundreds of persons born abroad have been convicted of terrorism-related crimes in the United States.  They have included not just persons who came here legally on visas but also individuals who first entered the country as refugees.  For example, in January 2013, two Iraqi nationals admitted to the United States as refugees in 2009 were sentenced to 40 years and to life in prison, respectively, for multiple terrorism-related offenses.  And in October 2014, a native of Somalia who had been brought to the United States as a child refugee and later became a naturalized United States citizen was sentenced to 30 years in prison for attempting to use a weapon of mass destruction as part of a plot to detonate a bomb at a crowded Christmas-tree-lighting ceremony in Portland, Oregon.  The Attorney General has reported to me that more than 300 persons who entered the United States as refugees are currently the subjects of counterterrorism investigations by the Federal Bureau of Investigation.

While many have read what CNN has said on EO 13780, it is unlikely that many have actually read President Trump's order. We therefore make it available here:

While mainstream media outlets portray EO 13780 as discriminatory, immoral, unfair, against diversity and claim it will cause economic harm, we must take two points into consideration.

1. The purpose of EO 13780 - to protect the country from foreign nationals who attempt to enter the country for carrying out terrorist acts against our citizens.

2. The source and nature of tech work - Most immigrants in the US who work in the  technology field are from countries not named in EO 13780. These countries include China, India and many of the "Eastern Bloc" countries in Europe. While this is not to say that there are no tech workers from Iran or Syria, it is not the numbers that play into the hyperbole projected by the tech companies who are protesting President Trump's Executive Order.

2a. While it is true that the US does rely on immigrant workers in industries besides technology, this begets the question of why the US is not generating enough skilled tech workers to fill today's jobs. Most of the technology in today's world was pioneered in the United States. The first commercial computer, UNIVAC, was built in the US. Other inventions such as UNIX (which later spawned into LINUX, which runs most commercial devices today such as routers, WiFi access points and so on), Microsoft Windows, and the hardware we use, were all developed here in the US by US citizens.

2b. In today's digitally connected world, most tech-related tasks can be accomplished from anywhere in the world. This includes many functions performed by tech workers, be it IT support or software development. These work processes are unaffected by EO 13780.

President Trump's vision is for a secure America that takes care of it's citizens first. EO 13780 accomplishes this by providing a temporary slowdown to existing visa programs. It is not a ban on Muslims or Islam. Nor does it stifle the economy or cause harm to technology related firms.

In conclusion, Richmond Computer condemns the position taken by the companies protesting the President's order. Going forward, we are boycotting all services provided by these companies.

Additionally, Richmond Computer supports Executive Order 13780. We recognize this as a temporary measure for the various Federal agencies to evaluate existing immigration rules and programs and is not discriminatory against anyone's ethnicity or religion. It is a measure taken to evaluate national security and protect our citizens.

Pay to Play in Philadelphia hits tech work too

While Richmond Computer is in the tech business, every now and then we do projects such as network wiring installation which isn't terribly complicated.

However in the city of Philadelphia, to do so, one must be a union member and pay exorbitant fees to the Licensing and Inspections department to run low voltage wiring. On top of that, a city inspector has to sign off on drawings, then inspect the work when complete. This only adds to the cost of doing business in the city, and no one but the unions and city wins. Not a problem in the suburbs.

As reported in Aviation week, the FAA is considering moving telecommunication systems for Air Traffic Control to VOIP.

While some posters in the article feel this would introduce safety and security concerns, we know VOIP to be a sound technology for the future of telecommunications. Good VOIP systems, such as those offered by our subsidiary, PennTelco, offer backup and redundancies including the ability to redirect calls to alternate numbers in the event that the system goes down.

Visit www.PennTelco.com for more information about our VOIP systems.
Posted by Unknown at 11:30 AM No comments:

We do not tolerate subpar vendors, and neither should you 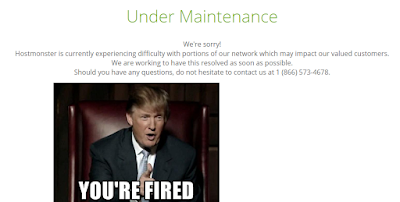 With the launch of our Critical Express Service, we were reminded of another company that does not take their commitment to customer service seriously. We used to have a small number of clients on HostMonster, whom we have now deemed "HostIdiot." HostIdiot had a major service disruption that is still persisting for over 10 hours as of the time of this writing. In that time, we had accomplished an email migration to GSuite (Google's excellent business class email service), set up a server for a PennTelCo customer, emergency-migrated some domains over to our High Availability datacenter, performed an OsTicket Install, and solved a user's particularly tricky e/mail password issue. Fortunately, all our current hosting customers, as well as our website, are on a dedicated co-located server located in a secure Oklahoma Datacenter that guarantees (via SLA) 99.99% uptime. This means that there is a tolerance of just 1 hour of downtime per year. We had completed the last of our data migrations to this new server location for one of our hold-out customers just days prior! Talk about fortuitous timing. We host our Voice Over IP customers in a similar high-availability Wisconsin or New Jersey Datacenter on dedicated servers that guarantee 99.99% uptime and which has a proven record of 99.995% uptime - less than 30 minutes down - per year. We are proud of this record, and it is part of the reason why we are rolling our our Critical Express Service - more on that later.

HostIdiot also has a slew of other problems that will rear their ugly head in the beginning of January for their customers as well as customers of similar services, such as GoDaddy and HostGator. Due to new Google policies, all websites that are not SSL Secure compliant will be listed as such in Chrome and will eventually face de-listing from Google. Even worse, most websites on the web are not SSL compliant at the moment because of the technical complexity and specialzed server requirements necessary (at the very minimum an SSL certificate and a dedicated IP address). We encourage you to take a look at the informational webpage we set up that will tell you a little more about the issue. We encourage you to engage our services to ensure a smooth transition, as well.

And now for perhaps our biggest announcement. A recent critical emergency service call highlighted to us the need for a new class of service, one that we have called Critical Express. With our Critical Express service, customers experiencing mission-critical downtime with a potential impact to business loss of $1,500 or more can engage with our Critical Express Service team. When you invoke this special service, all our current engagements are placed on hold and your service request is given our top priority by all technicians on call. We direct our tech resources at getting you back up and running as soon as possible.

There is, however, one facet of our service that makes us the only managed IT services firm in the nation to provide it, and that is our air service.  Our Senior Linux and Windows Technical administrator is also an FAA Certified Pilot. From our satellite base in Washington, DC, we can dispatch this technician for extra-critical issues where remote support or driving to the location just won't cut it. We have an available fleet of two aircraft (a Piper Warrior and Socata Tobago), ready to go at an instant's notice! Moreover, our air service is available at the same price as our ground service! This is an incredible value and resource that allows us to service most of the eastern seaboard within mere hours for especially critical remote incidents when remote access just will not do the job. We are proud of this new service, and especially encourage our customers to spread the word to those who might benefit from this sort of service in case it is needed.
Posted by Unknown at 9:03 PM No comments:

An article posted on Philly.com today regarding Verizon's push to phase out copper based phone service provided us a good opportunity to highlight the benefits of switching to our flagship voice service, PennTelco.

Internet based phone service has been on the market for several years and has made huge advances in quality and features. We began offering this service to our customers in 2015. When you upgrade to Verizon digital voice or Comcast's phone service, you are also using IP based phone service.

So what's the difference, and why switch to PennTelco over a communications giant like Verizon? Simple!

First, our service costs less than Verizon or Comcast. Secondly, our service offers more features than both mainstream carriers. While we offer similar features like voicemail to email, features we offer that these carriers don't include:

Following over 4 months of troubleshooting with Grandstream engineers, it has been determined that the BLF feature does not work when using the Anveo virtual PBX system. The phones fail to display a correct aspect after being in use for a short period of time because the Anveo server uses an incorrect phone ID number when attempting to send a BLF NOTIFY packet to other phones.

We have made Anveo aware of this defect. Unfortunately Anveo's management has shown zero interest in working with Grandstream to fix the problem. Since Anveo advertises BLF as working on one of their YouTube videos, we believe this to be false advertising on their part. View our demonstration video:

Anveo-Grandstream BLF SMACKDOWN
Posted by Unknown at 6:57 PM No comments:

We have discovered that BLF does not work properly on the GXP2130 phones due to a SIP compliance issue with the phones. According to RFC 3265 (which governs SIP Event Notifications protocol) permits empty body NOTIFY body. This makes the phones not fully compliant with SIP standards. We would like to see this fixed with a firmware upgrade ASAP.